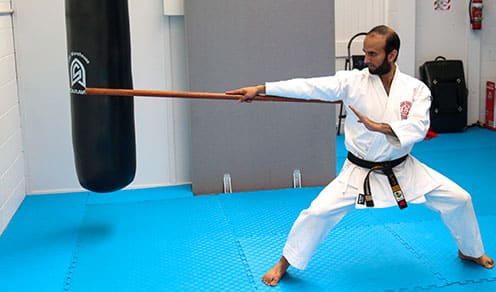 Shihan Syed Mohiuddin is the founder and Chief Instructor of Lion Budokan Karate International, New Zealand. ‘Shihan’ is the Martial Arts title awarded to him. He has been training and teaching Karate for over thirty years now.

Shihan Syed had to decide between Cricket and Karate when he was in early teens. He says he never regrets the decision of choosing Karate as the main sport. Shihan Syed’s passion and commitment towards Karate can easily be seen in the continued growth of LBKI dojos. His unique teaching method is helping many kids, youth and adults in India and New Zealand. Many students have gained their Black belts, and some are working towards their 2nd Dan Black belt qualifications.

Shihan Syed believes that Karate-do is much more than the ability to fight and being fit – it’s the way of life and should reflect in one’s personality through his/her day-to-day affairs.

Shihan Syed is a double master graduate. He has studied Master of Computer Applications in India and pursued Master of Business from Unitec in Auckland. He oversees a web development and digital marketing company and helps individuals and small businesses by mentoring and support.

Shihan Syed participated in several tournaments and won awards and recognition. Among his latest achievements is the first place in Shotokan tournament in Auckland in 2017 and the third place in All Japan Tournament in Fukuoka, Japan in 2018. He is a Black Belt 5th Dan from Shorinji Ryu Seishin Kan Karate-do Renmei, Japan and a Black Belt 5th Dan from Lion Budokan Karate International, India.

He is actively taking classes at LBKI branches. Other than the regular lessons Shihan Syed takes sessions to security groups, Social groups and Academic Schools in Auckland.

This site uses cookies to provide you with great user experience. By using budokan.co.nz you accept our use of cookies Accept Read More

Any cookies that may not be particularly necessary for the website to function and is used specifically to collect user personal data via analytics, ads, other embedded contents are termed as non-necessary cookies. It is mandatory to procure user consent prior to running these cookies on your website.